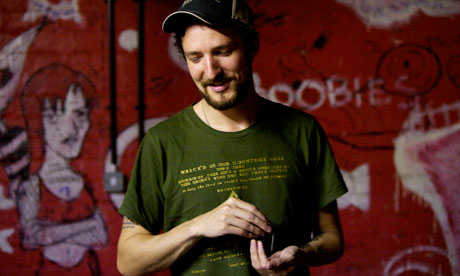 What a week it’s been. The album is out, I’ve been on tour around the UK, and everything has been going a bit insane. I’ve been holding on in the middle of the maelstrom (thanks Sleeping Souls) but overall, it’s good to be alive this week.

Lots of people have been buying ‘Tape Deck Heart‘, and I’m grateful to all of you for that. Madly enough, we are currently at #2 in the UK album charts, between Michael Buble and Will.I.Am. That’s not a sentence I thought I’d be typing any time soon. We will see how it goes come Sunday, but even to be here now is pretty funny, and kind of exciting too.

The UK shows have all been awesome (apologies for the hyperbole but it’s true). The #FTHCFlag also went better than I could have imagined, with a lot of really lovely people pulling together on Twitter to bring it around the country. We are now auctioning the flag off and raising funds for Shelter, watch a video about it here and bid on the flag here.

I’m now heading to Europe for Groezrock festival and more shows on the continent. I’m pretty intensely tired, but feeling good about things.

Thanks everyone for your support. Onwards and upwards.