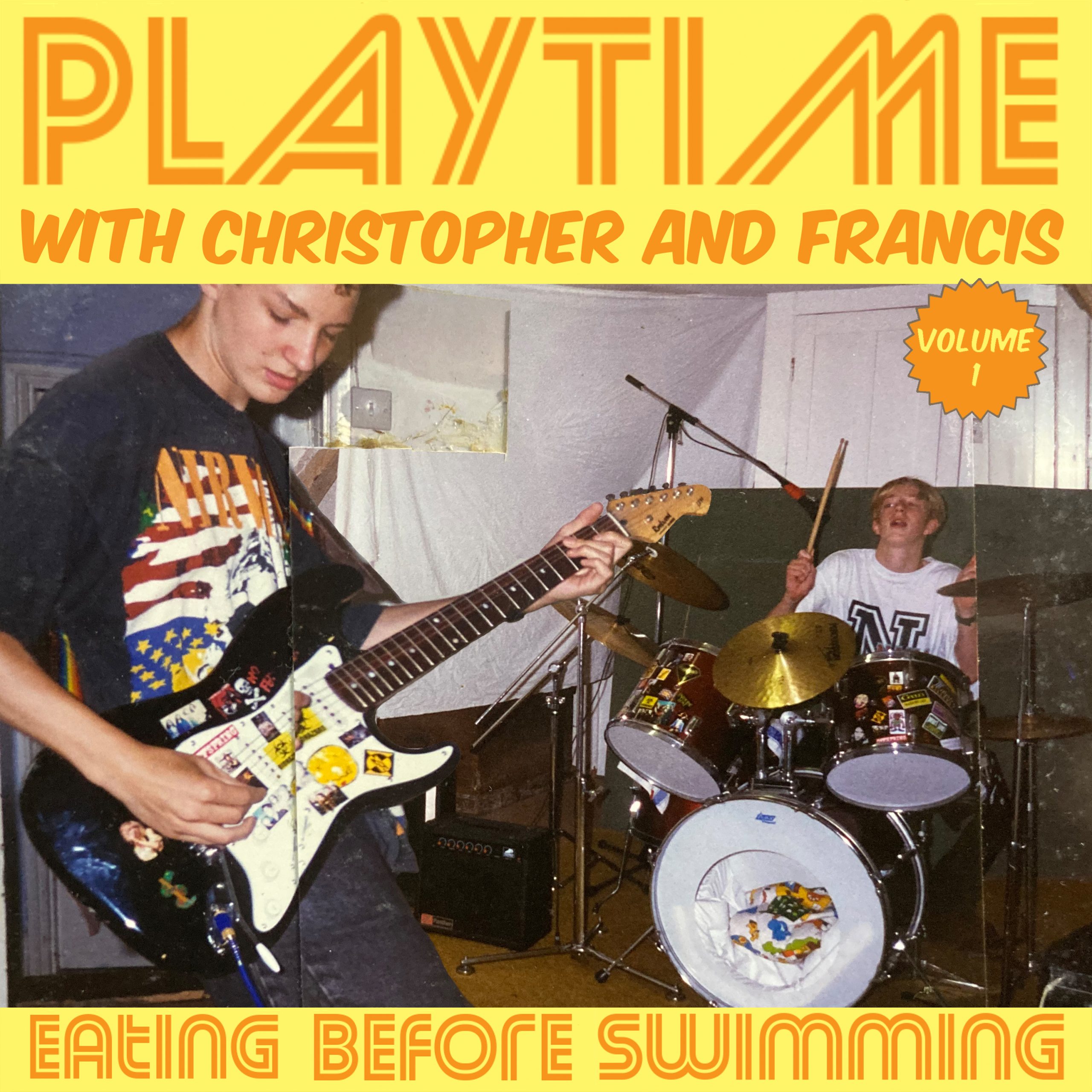 Today sees the release of “Playtime with Christopher & Francis Volume 1”, the debut of a new musical project of mine, Eating Before Swimming. I wanted to tell you all a little about it, and encourage you to take a listen.

Chris Blake and I met at the village primary school in Meonstoke, Hampshire, in 1985, when I was 3 and he was 5. We lived on the same street and became firm friends pretty much immediately, bonding over a love of Action Force toys, for the most part. We stayed friends past that school, and by time we were in double figures, music had entered our lives. I fell for Iron Maiden, Chris for Metallica. I got a guitar and amp from Argos for Christmas, Chris got a drumkit. Set up in his bedroom, we started our first musical ventures together aged 11 and 13.

That band (a million different names, all terrible, very rough recordings do exist but NO YOU CAN’T HAVE THEM) continued in one form or another through our middle teens. We played birthday parties for my older sister and our bass player, Toby (both medium disastrous events). We covered AC/DC and Nirvana, and had some truly dreadful original songs. Over time the band drifted apart, but Chris and I stayed friends.

I moved to London after school, and set off on my own various courses. Chris played in a handful of great bands in Winchester and Southampton, and got more and more involved in electronic music, releasing stuff as Palest Boy At School. Throughout this whole period, we kept in touch, and kept discussing the idea of collaborating on something. Tapes of some very weird sounds got sent in the mail. Drum machines were programmed, guitars were bent out of tune, but nothing quite coalesced.

Roughly 10 years ago, we came across an idea for a proper project; it would involve a post-modern attack on some of our favourite old pop songs, a deconstructionist (not to mention absurdist) examination of how far you can push a song before it falls apart. It would be noisy, aggressive, weird and fun. I started tracking vocals and guitar for a few songs, occasionally piano, sending them to Chris, and he’d work on them while I was on the road.

Neither of us thought it would take quite this long to finish the damn thing. We’ve had hold-ups due to my schedule, sorting out mixes (this is a difficult approach genre to nail, sonically), getting clearance on some of the songs from frankly bemused publishers, my schedule again, finding a band name that we liked that wasn’t taken (Eating Before Swimming was the first idea; then we had a million others, then went back to the start), a pandemic, the works. We made videos, made plans, shunted things around the diary, and then FINALLY, in August 2022, here we are.

The record is out today. We don’t know if we’ll do more of this (hopefully!), we haven’t yet worked out if shows are even possible. We hope you like it. Here’s a video we made in lockdown. Brace yourself.