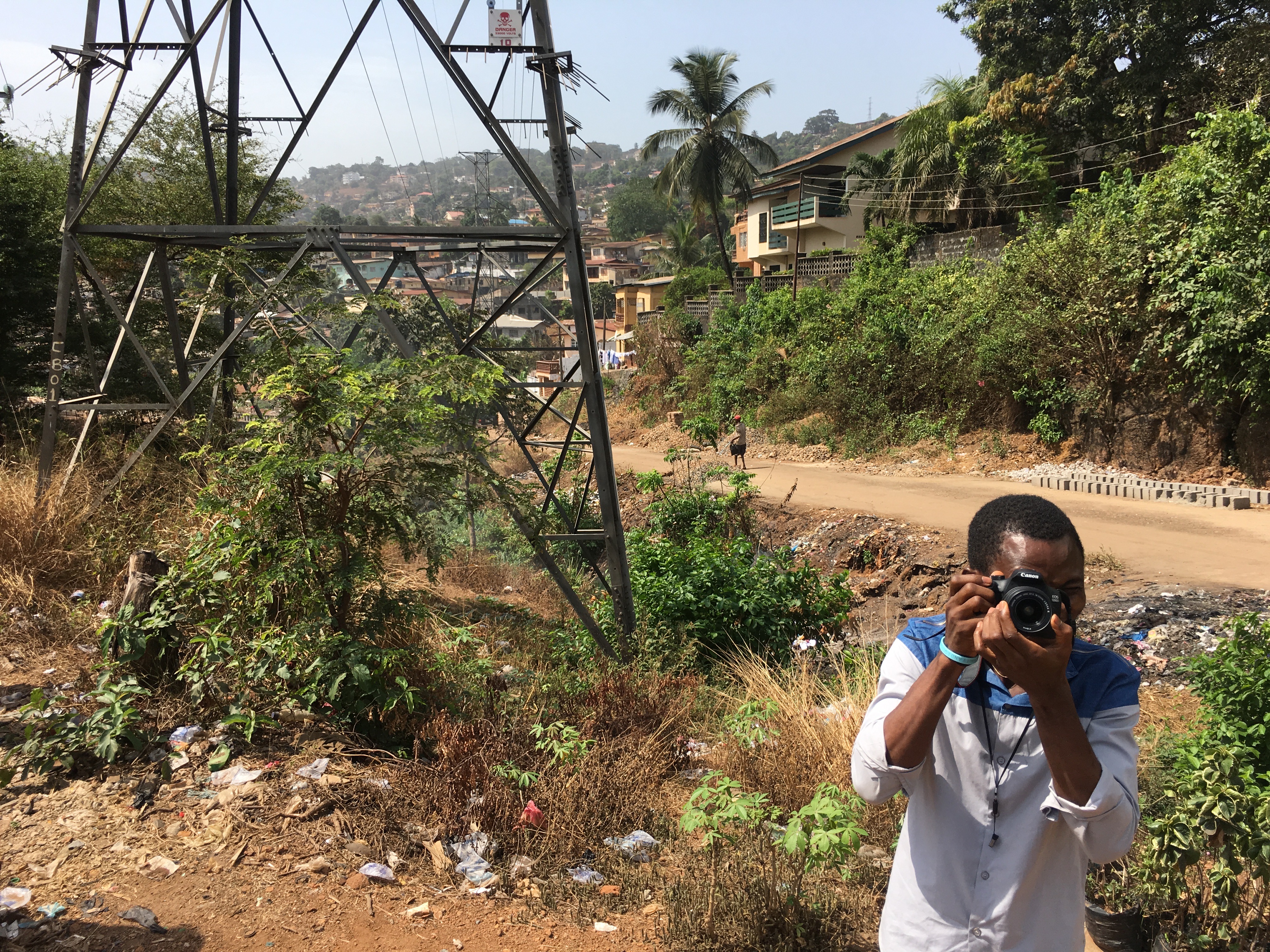 This is part 2 of my Sierra Leone diary. Part 1 can be found here. You can donate to Way Out Arts here.

DAY 2: WAY OUT SAVED OUR LIVES

Three hours later, Ben shook me out of a deliciously deep sleep and summoned me to breakfast. I was drained, but also impatient to get on with the day. A cold and lacklustre shower brought me further into the land of the living, and the process was completed on the veranda with a serving of breakfast pancakes, cheerily presented by Patricia, the house manager.

At 10am sharp, Hazel and John arrived to collect us for the 20 minute walk to the headquarters of Way Our Arts. We strolled along the main road in the mounting heat, trying to remember to measure our paces so as not to burn up too quickly. I tallied aid agency billboards as Hazel filled me in with more information about the charity and the country.

The first things she told me about Way Out were not to eat food of my own in front of people (because they’re usually hungry themselves and struggle to buy food), and not to bring weapons, drugs or alcohol onto the property. The contours of the kind of people we’d be meeting were starting to emerge properly. Sierra Leone is one of the poorest countries in the world, but it hasn’t always been. At independence from Britain in 1961 it was something of a success story, known occasionally as “the Athens of West Africa” due to its high turnout of capable black African administrators. Unfortunately the country is also cursed with alluvial diamond deposits – easy to mine, impossible to police effectively – which have been a constant source of misery. A series of coups in 1964 was followed by the long one-party rule of Siaka Stevens. By the time of his retirement in 1985, the country was a hollow shell of poverty and corruption. When the RUF, a rebel group back by Charles Taylor, the dictator of neighbouring Liberia, invaded in 1991, the country collapsed into a bitter 11-year civil war, featuring child soldiers and extreme levels of mindless violence. The UN, and later the British Army, managed to stabilise the situation after the horrific massacre in Freetown in 1999, and the war officially ended in 2002. Sixteen years of uneasy peace had passed, but the scars of the war were still fresh, deep and on display.

In that context, what happened next will stay with me for a long, long time. We arrived at Way Out – a crumbling old two-storey building with a walled courtyard outside – and found around 40 of the kids sitting on chairs in a circle. As we came through the gates they stood up and began to sing the chorus to my song, “The Next Storm”: “I don’t want to spend the whole of my life indoors…”. I was absolutely speechless. Immediately they sat me down and encouraged us to get out some of the guitars we’d brought, so Ben and I ran through that song and “Get Better”, with clapping, dancing and singing provided by the members. Once we’d played two songs, some of the older kids stood up and made small speeches of welcome, explaining how important Way Out was and how they appreciated our visit. It was deeply humbling.

It’s probably worth an early mention of one of the main dilemmas for me about the trip as a whole. I was extremely wary, both before and during our stay, about what I think of as the Bono complex – or perhaps, more fairly, Russell Brand’s character in the film “Get Him To The Greek”. I was at pains not to imagine that my going to Sierra Leone was in any way heroic, that my presence there would achieve anything much at all for such a complex and dire situation; I wanted to avoid any kind of white saviour complex. And yet we had been invited, by Hazel, who knows much more than I ever will about the place, and she placed value in our being there. It was tough to figure out precisely where that value lay, and how to approach the subject, on a personal level. I think I reached some kind of conclusion by the time we flew home, but we’ll come to that later.

Guitar students at Way Out

Our initial welcoming party broke up (followed by a mass selfie-session – the students with mobile phones incessantly snapping endless combinations of poses, a habit that was got pretty out of hand at times on our visit), and then we were shown around the studio. In the main control room I met Thomas, a seriously talented producer, who was in the middle of building a beat with Vinique, a Guinean rapper. I met Mash-P, a homeless former child soldier turned singer (Hazel made a documentary about him, After The Jungle, for the BBC in 2015), and Gibo and Josta, Hazel’s faithful lieutenants. The four guitars we’d brought with us were distributed, and I sat down for a guitar lesson with about 5 people. We worked through four basic chords – G, D, E minor and C – so that they could learn the song “No Woman No Cry”, something of a local anthem.

After a quick lunch of surprisingly tasty omelette sandwiches, we were given a brief tour of the local area. Behind the complex is an area called Black Street, home of the Black Street Family. The Family started out as an extremely tough street gang, but over time, with Way Out’s gentle steering, they have evolved into a gangsta rap group of sorts (though their neighbourhood prowess remains considerable). Strolling down the main drag with Hazel was surreal – a kindly, ambling English woman perfectly at home in the heart of Freetown gangland. They all call her “Mamma”, and I got the impression she was in very safe hands there. We were introduced to a guy sat on a dilapidated white plastic chair, who was, apparently, the Chairman of Black Street. We were bade welcome.

Once we were done at Black Street, an enthusiastic Mash-P took us to see his “block”. This turned out to be an abandoned, half-finished structure of cinderblocks and cement nearby. The entrance had “MASH” proudly sprayed on the wall, and on the first floor mash showed us his room. With real emotion, he told us that Way Out had paid for him to have a door fitted, complete with a lock, turning an alcove into a room for him. He opened up and we saw a small area, maybe 2 metres by 3, with a foam mattress and a small pile of clothes and other belongings. Mash crouched down and scrambled around for some papers, which he proudly showed us – Way Out Arts certificates in Photoshop, digital editing, recording and documentary making. The music achievement one was signed by Michael Eavis, but I don’t think Mash knew who that was.

In the cool dusty shadows outside his temporary home – he has to leave come rainy season as the room will flood – Mash evangelised for Way Out. He told us a brief outline of his life – being kidnapped at 9, becoming a child soldier, rejected by his mother after the war, living rough in Freetown, hiding from the cops, before finding Hazel. “Music is my whole life. Way Out saved our lives, man.” I didn’t know exactly what to say, but that elusive value started to emerge from the shadows.

Mash-P with Way Out certificate

We made our way back to the studio, where Mash played me a new song of his “After The Jungle” – that he wanted me to sing on. I took a copy on a USB stick to work on. Meanwhile, Dave was in the rehearsal room teaching drums, and Ben was working on more guitar lessons. Some of the people I’d taught in the morning were rigorously working through the chords, correcting each others’ progress. I taught some more students from scratch.

I stopped by the drum room, which was a particularly fascinating experience for me. I wanted to learn more about African music, particularly the rhythmic aspect, while I was there. Dave began by teaching a basic, meat-and-potatoes, rock’n’roll beat – eight counts on the highhat, kick and snare on alternate beats. Some of the students were grasping it better than others, but overall it was happy yet slow progress. However, one of the youngsters, on his own initiative, started playing a syncopated beat – four-on-the-floor on the kick drum, with a shifting rhythm over the top. To my Western ears, this was a much more complicated drum patter to attempt, but all of the kids found it much easier to play than what they’d started with. It was a salutary lesson in the cultural nurturing of our musical assumptions.

The complex was a happy hive of activity as the heat of the day finally started to wane and the shadows lengthened, bringing a gorgeous early evening rose-coloured light to the red earth. We were paid a brief visit by Cooper – a friendly American freelance journalist living in Freetown, who’d contacted me about doing a story on our visit. We sat in the courtyard and were treated to a small performance by King Pizza, who rapped to us on the subject of “Water Is Life!” Afterwards, a female student brought Dave’s crutch down from the rehearsal room – “You left your foot upstairs!”. We visited the editing suite on the ground floor, where we met Meeky – a shy young man who quietly writes sweet, beautiful love songs; we watched a couple of the music videos he’d made for them.

As much fun as we were having, the four of us were also still holed below the waterline by the inbound travel schedule, so at about 6pm we wandered back up the road to the hotel, through crowds of immaculately-turned out schoolgirls in archaic uniforms, back to a quick dinner, a beer, and an even quicker collapse into bed.