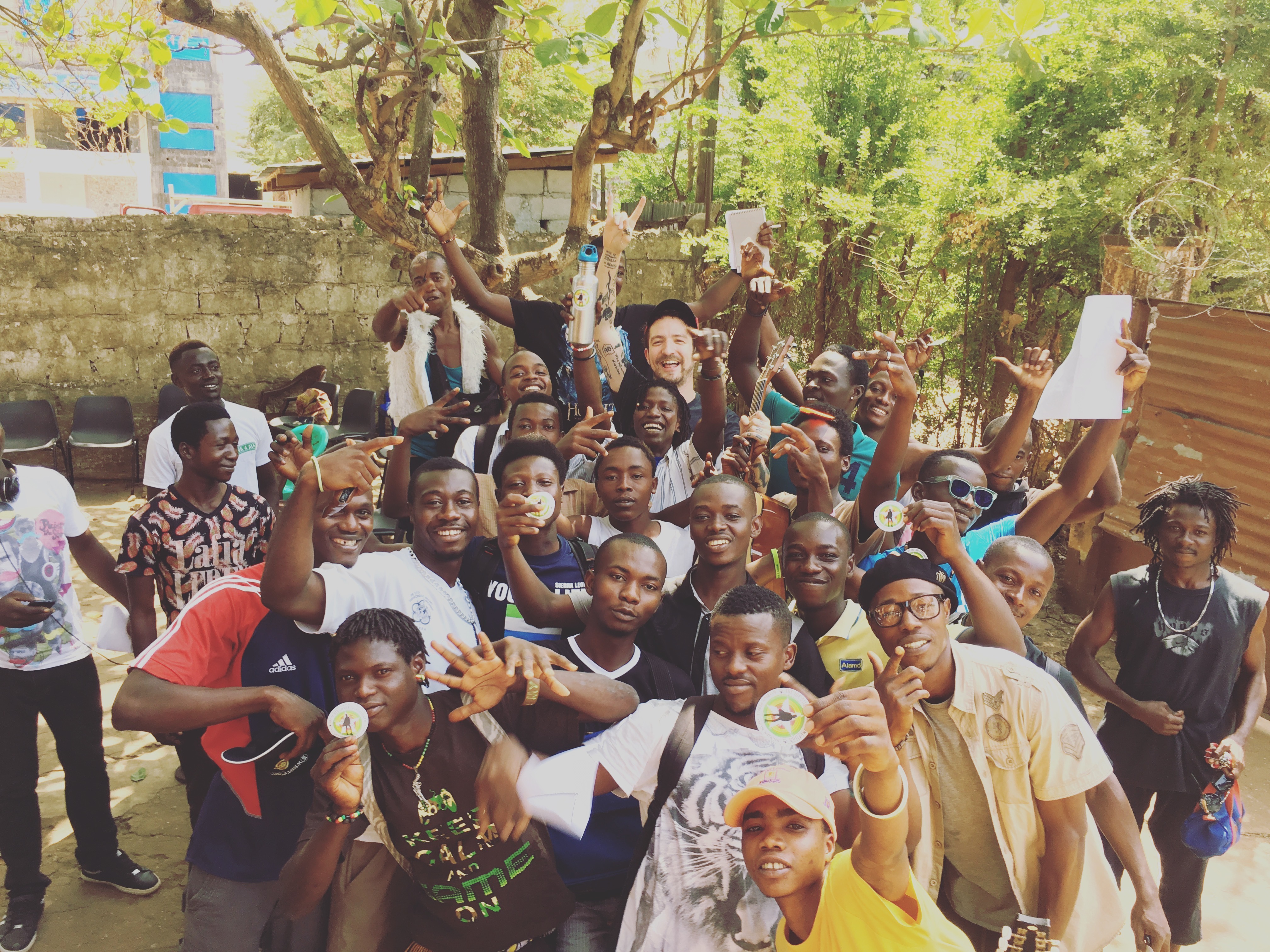 In the summer of 2016, I received a call from an old friend. Jamie Webb used to run the bar at Nambucca, my old haunt, but since the fire there in 2008 he’d moved on. These days he runs a group called The Joe Strummer Foundation (formerly Strummerville). They raise funds in the UK which they then disburse to different charitable groups around the world.

The purpose of Jamie’s call was to ask me a wholly unexpected question: would I be interested in visiting Sierra Leone? The Foundation were working with a group in the capital, Freetown, called Way Out Arts, who worked to bring music to disaffected and disadvantaged street kids, some of the poorest people in the world. The trip would be part investigative – checking out for ourselves exactly what Way Out were doing – and partly a publicity and fund-raising venture.

I like to consider myself game for pretty much anything, someone with a sense of adventure, but I have to admit that I briefly paused for thought at the offer. I knew very little indeed about Sierra Leone, other than what I’d learned from casual newspaper reading, and a half-forgotten viewing of the film “Blood Diamond”. In line with that, my associations were, chiefly, a vicious civil war, child soldiers, and conflict diamonds. Immediately after bringing myself up short on that thought, my mind flipped in the other direction. It seemed to me somehow mean, or cheap, to dismiss a country of which I was ignorant with a short list of Hollywood-generated stereotypes. After some brief reading up on Way Out, I decided to accept the offer to go.

Much logistical back-and-forth followed, as it usually does with the hectic state of my diary, but eventually we decided on sending a four-person team to the country in March of 2017. Jamie, our mutual friend (and JSF worker) Dave Danger, and Ben Lloyd of the Sleeping Souls would make the trip. Visas were acquired, jabs were jabbed, and books were read, in the countdown for our departure.

There are many fine lines to be trod in a venture of this sort, and indeed in writing about it. The first one to be encountered was the line between trying to prepare for the trip by educating myself about the country, on the one hand, and keeping my mind, my eyes and my ears as open as possible to the empirical experience of being there. I didn’t want to go to Freetown completely blind, but I also didn’t want to load myself with preconceptions about our destination. I settled on a couple of history books and a travel journal by journalist Tim Butcher, who walked across the country in 2009.

Despite these preparations, when the time for the trip finally rolled around, I realised that I was still essentially stepping into a complete unknown. That’s something I rarely do on my travels these days, so it was with some trepidation mixed with excitement that I set out for Heathrow airport on a sunny Wednesday morning.

DAY 1: YOU’RE BEAUTIFUL BUT I DON’T LIKE YOUR SHORTS

The four of us met up in the smoking area outside the terminal in the unseasonable March sunshine. Dave had twisted his knee in a skiing accident a few weeks before, so he brought a grey hospital crutch along with him for the ride. Jamie brought four acoustic guitars, a kind of downpayment for Way Out on a future shipment of equipment, bought with funds that we’d raise online. We checked in easily, carrying the guitars with us through security, and caught up over a pub lunch, grasping at the last reliables fibres of wifi before we set off.

Our itinerary took us first to Casablanca, a three hour hop with a dramatic storm in the distance as we landed. After that, we had four hours to kill before our connection to Freetown; the flights to and from Sierra Leone are few and far between, and they tend to be at ungodly hours of the night. We skittered around Mohammed V airport, a slightly ramshackle affair, complete with redundant extra security checks carried out by angry, sweaty guards, who spent as much time pushing and shouting at each other as they did examining our affairs. In the countdown to our midnight takeoff we drank beers and discussed our destination, and joked about playing an impromptu show there and then with the Way Out guitars. One of the bartenders told Dave that he was beautiful, but she didn’t like his shorts.

As boarding time laboriously crept along, we gathered with our fellow passengers at the gate, the last chance saloon, last flight of the night. Ageing American missionaries, chubby Chinese businessmen and a blue-shirted, exuberant Sierra Leonean soccer team mingled, chatted and formed a queue. Finally we were off; following hard-learned techniques I cocooned myself in my cramped seat, ear-plugs in, hoodie up, pillow against the window, and tried to catch a little sleep.

I was woken by our bumpy arrival on the tarmac at Lungi airport. According to my reading, Freetown is one of the best natural harbours on the West African coast, with deep-water channels, a protective spit of land and the curved, lion-esque shelter of the Sierra that led the Portuguese to give the country its name. But these same factors make for a terrible location for an airport, so they built one across the water at Lungi instead. We groggily disembarked, comparing tallies of hours slept, and boarded a pointless bus that carried us all of 50 metres to the terminal.

The airport itself, on the arrival side, was pleasantly clean, modern and efficient. We were whisked through immigration, complete with finger-scanners, and collected our bags. At this point I started making notes about the adverts and billboards, which became something of an obsession over the course of the trip. My first specimens were for logistics firms, mobile phone companies (the ubiquitous Africell) and anti-corruption drives: “Together we can fight corruption and build a better Sierra Leone”.

The tide of travellers eventually spat us out into the warm night – it was about 4.30am – and into the arms of a gaggle of excited locals, all offering initial warm welcomes that carried the foretaste of a transaction. In the midst of the melee we managed to locate John from Way Out Arts. John is one of the senior members of the organisation; along with a few others, he actually draws a small salary for his work, and the charity has got him off the street into rented accommodation. He’s in his mid-30s, has a wicked, sarcastic sense of humour, and a fierce dedication to his team.

With John on the ferry

John shepherded us onto a bus to the ferryport, happily declaring “We’re team!” (which seemed unlikely to us sleep-deprived new arrivals), where we had to take a boat across the water to Freetown proper. The road down to the water was a ludicrous mountain range of potholes down a steep hill, our first real taste of the low level of development in the country. En route, John started teaching me some words in Krio, the main local language. Every linguistic success on my part was met with much hilarity on his, and he was soon on the phone to our welcoming committee in the city, telling them I spoke “small small Krio”. Krio is a pidgin, so after a few days in the country I was able to tune in and understand maybe up to half of a conversation, but at this time it was still fairly impenetrable.

The ferry carried us 25 minutes over the water. Onboard, I got chatting with an older American called Will, a farmer from South Dakota, who was in the country working for a Christian missionary organisation, taking solar powered ovens to people in the rural areas of the country. We talked Willie Nelson and Kenny Rogers, my mind spinning with fatigue.The four of us were exhausted, paper-thin sketches of people by time we arrived to be met by Hazel.

Hazel is the founder of and driving force behind Way Out Arts. She’s originally from Manchester, lived and worked in London as a film maker for many years, before coming to Sierra Leone in 2004 whilst shooting a documentary about a Liberian politician. Something about the place stuck in her blood and she’s been coming back ever since, helping to form the charity in 2008. Now she alternates a couple of months there and in the UK through the year. She greeted us with smiles, a video camera, and some local tips – locals were quite keen on shouting matches, men comfortably hold hands in public, and so on.

We boarded a couple of taxicabs (and were treated to a minor shouting match, which everyone seemed to thoroughly enjoy), and drove to our hotel – Jam Lodge. In the creeping dawn of 6am we scurried to our rooms and lay down to catch a few hours’ sleep, before the beginning of our first proper day of the trip.

Part 2 is here. More coming soon. In the meantime, you can donate to Way Out / Strummerville here.