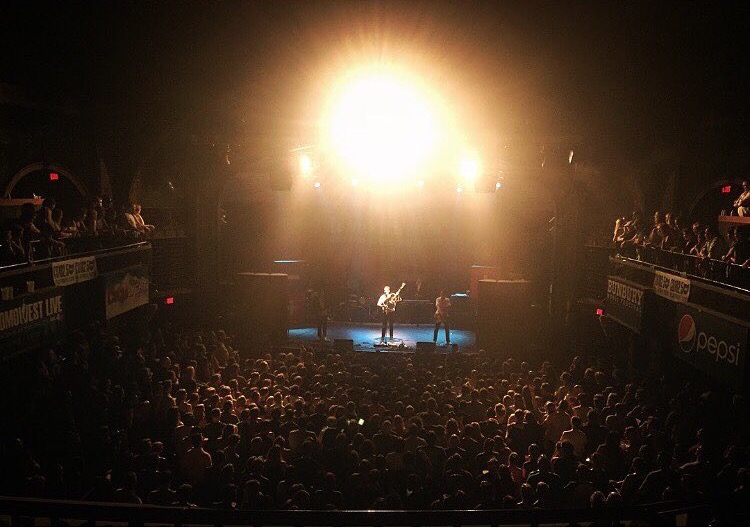 Greetings from Memphis in May. We have a day off here today. It’s a burning hot Memorial Day outside, but, after paying tribute to Elvis by stuffing myself with brunch, I’m mostly going to be holed up in my hotel working on demoing some new material.

I haven’t blogged in a little while, so I thought I’d set that right. I also noticed that I’ve tended to pick subjects on the more negative side of the divide for the last few posts. So here I’m going to try and be a bit more upbeat. It’s a whole new day.

This US run has been fun. We started at the Elm Street Tattoo Festival in Dallas TX (where I got my Dale Gribble ink done). Then we picked up our road buddies and headed across the south and the midwest. We have one more show with them left – tomorrow, here in Memphis, at the New Daisy Theater – so I thought I’d take a moment to write about them.

First up we have Derek, a.k.a. the Homeless Gospel Choir. We played a show with Derek in Pittsburgh back in 2010 and we were all blown away by his talent, his songs, his personality. I’ve been meaning to do more with the guy since then, but these things always take time. Happy to have him with us now, he’s been reminding me, night on night, what punk rock is supposed to feel like. Check out Musical Preferences if you’re unfamiliar with his stuff. He rules.

Then we have Two Cow Garage. I’ve vaguely known Micah for a few years now, through my good friend (and amazing artist) Vanessa Jean. I had some of their records and enjoyed them. We finally played a show with them last December in Nashville, and I spent their entire set with my jaw on the floor. They are an exceptional rock’n’roll band, and it’s an honour to go on after them night on night on this tour. Here’s a live session to get you started if you don’t know their stuff.

I always pick the openers for my tours, and I’m particularly proud of this line-up. I hope people at the shows have been enjoying them as much as I have, and for the rest of you, waste no time in checking them out. It’s sad that we only have one more show together… for now.

After the Memphis show we are joining up for two weeks of shows with Gogol Bordello, across OK / TX / AL / FL / GA, which I’m stoked about. It’ll be one hell of a bill. Then we meet up with Mr Isbell, but I’ll write more about that later.

In the meantime, I’m pleased to announce what you’ve hopefully already noticed: we’ve overhauled the website completely. Hopefully it now looks and functions a lot better, and I’m working on adding content and smoothing out any bugs. If anyone spots any typos or anything obviously missing or wrong, do let me know. For the time being, I finally added the lyrics to the Mongol Horde record in the songs section. Enjoy.

Finally, a quick shout out for the wonderful Camden Rocks Festival happening in Camden (duh), London, this Saturday June 4th. I’m gutted that I’m missing it, the line-up is ace and it’s one of my favourite musical events of the year, celebrating one of my favourite parts of the world. If you’re in London you should be there.

Right, time to work on some new songs.

6 thoughts on “Sunny Side Up”