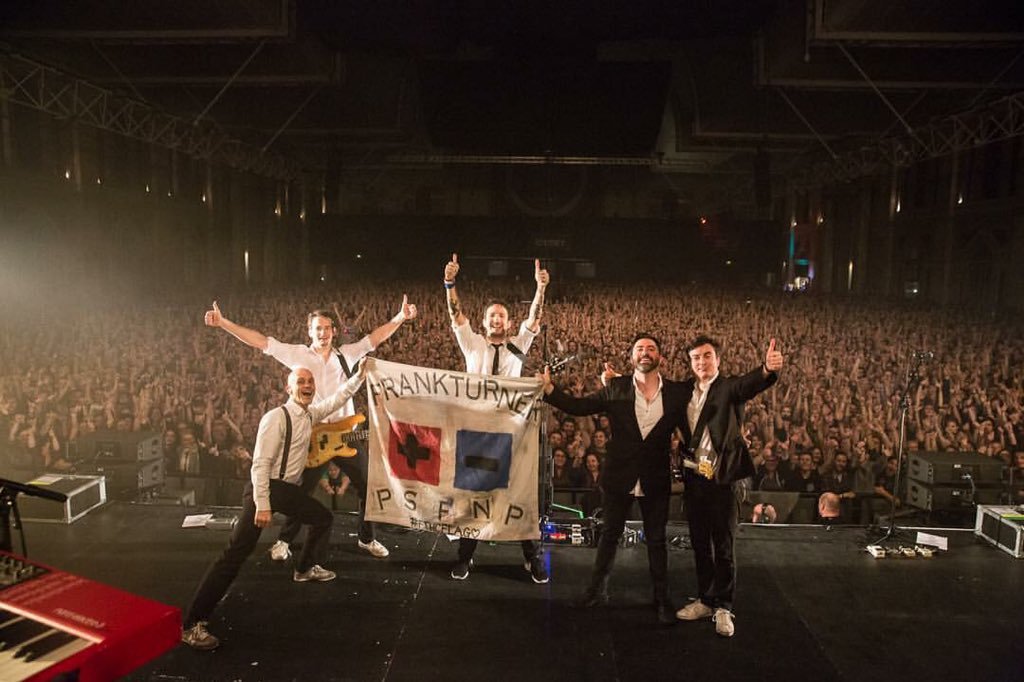 Greetings from a hotel room in Milan. We’ve just arrived after a mammoth journey from Madrid, via Montpellier (and probably some other places beginning with M – I slept through as much of it as I could). Last night we celebrated Ben Lloyd’s birthday, and today I am paying for my sins.

As many of you will know, the last few years have seen a few Tour Flags at my shows. The idea is to have one that starts the tour and follows it, without being carried by me or my crew, just helping people make friends at shows, building a little community idea. It’s been great fun. Since the release of “Positive Songs”, we’ve had one tour flag with us (pictured at Ally Pally), made by the wonderful Val. It travelled the US, UK, northern Europe and Canada (and the cruise) with us, which was amazing.

Val decided that getting that flag around the European shows was too much to organise (quite understandably – I’m still slightly scared of some of the travel schedules we have coming up). So that flag has retired for now. But! But! In a lovely vindication of the principle behind the whole thing, Arabell has made a new flag, and asked me to pass on this message:

“If you see the tour flag, come by, say hi, ask us to take a picture with the flag, post it on instagram/facebook/twitter using the hashtag ‪#‎fthcflag‬ and spread the word. Get involved.
In Ljubljana we’ll meet at Kaverna Kino Siska, a bar at/in the venue in the late afternoon/early evening. In Bratislava we’ll meet at Fabrika the beer pub around 5ish, So just grab a chair and come by.

So, head down, make new friends, play nice. I’m going to relax into what we call “SLUG LIFE” on tour – which basically means putting on the hotel room dressing gown (if there is one) and mainlining room service and Netflix. See you at a show.